Steps to Develop a Successful Mobile App for Android

When programmers developed software for personal computers, there was one main operating system by that time – Windows. An alternative operating system, Linux, gradually gained a foothold in the market. The situation in the world of mobile technology is a bit different. Since the spread of smartphones and tablets, the market has been divided between two major operating systems – Android by Google and iOS by Apple. There are many technical differences between the two. It is necessary to know about the intricacies of the OS if you are going to launch the new mobile app and hope it will be successful. It is important to understand what to choose – iOS or Android? In this post, we will focus on Android after observing the differences between the two major OS for mobile devices.

Is It Better to Build iOS or Android Apps?

What are the differences between Android and iOS? The experts point out the following factors: 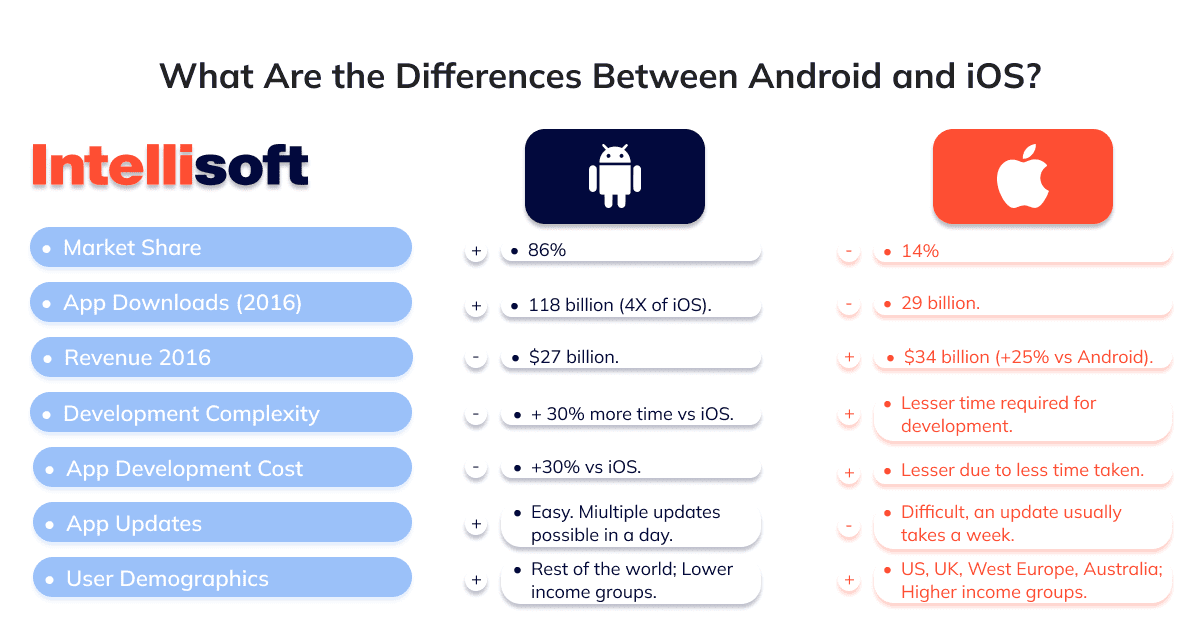 According to Internet marketers, the optimal option is to develop mobile applications for both OS, but it can be too expensive and risky to start with both at once. It is better to choose the platform most suitable for you and run apps on it. In the future, given the flaws and errors, you will be able to launch a similar product for another OS.

If you want to save money, it is better to start developing Android applications. Since the release of an iOS app is complicated by App Store policy, you will have to extra pay programmers for the long time they spend polishing the software. Running it on Android is easier, so it requires less investment. Cost is not always the best advisor, but it still matters for many development companies, especially start-ups.

The number of smartphone users reached 5.22 billion by the end of 2020, which represents 66% of the global population. As of 2022, 2.5 billion mobile users (over 86%) prefer Android. In contrast, 1.65 billion active devices are fans of Apple, and they are most heavily concentrated in the US, China, Canada, and Western Europe.

Android will remain the No. 1 operating system in emerging economies. The only case where it is advantageous to start with iOS right away is with apps for the most affluent segment of the population. For example, if you decide to launch a business app, feel free to start with it, seeking release on the App Store. It will require a lot of investment, but it will pay back relatively fast.

The advantages are numerous:

What are the disadvantages?

Advantages for developers include:

The disadvantages of iOS app development are:

How to Create Android Application 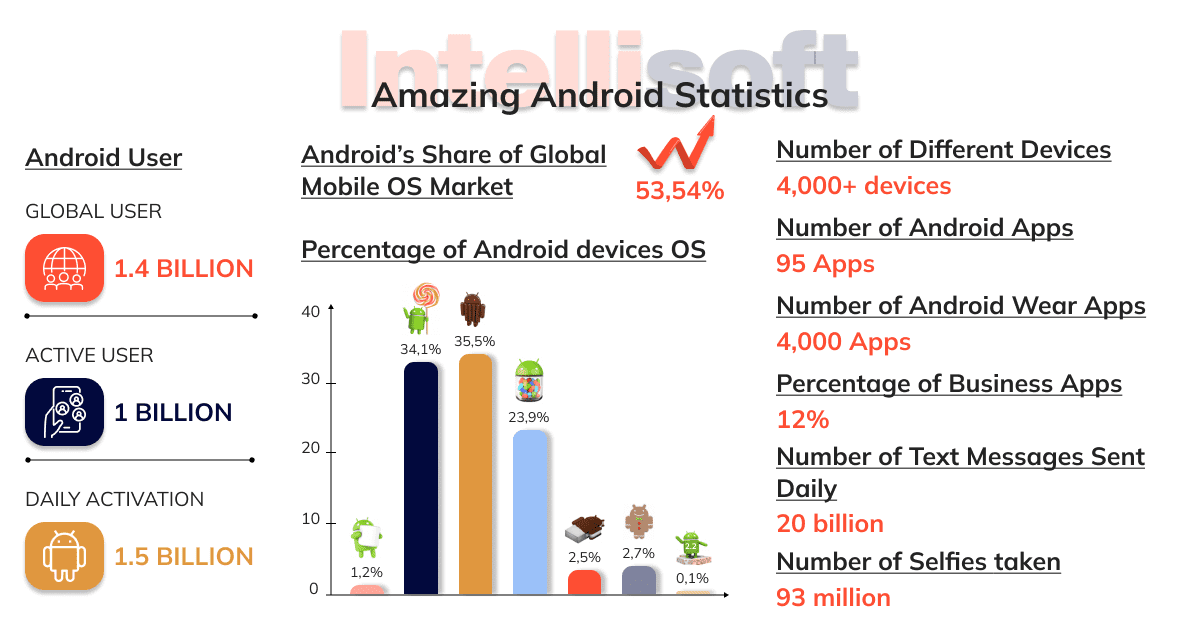 Of course, you can start trying to create your own unique and distinctive application for Android right away, but before you do, answer several questions:

Based on these criteria and their own measure of taste, the future developer should prepare content for the mobile app: logos, headlines, contact information, news/description texts, payment details, etc. All of this is a unique part of the software.

So, how to start Android app development? A successful mobile app starts with an app idea.

To create a successful mobile app, the first thing to keep in mind is:

To create a successful mobile app, you need to identify or clearly understand:

These methods can be used to generate revenue. However, the developer’s approach must match the app. It is critical for the developer to engage the user and spend money on different aspects.

At this point, you should also think about finances: how much money you want to allocate to development, marketing, and the final release.

Android app development is another important factor influencing the success of an app in the marketplace. The app developer should focus on user interface design and multi-touch gestures, as well as consider platform design standards.

Today, the emphasis is on app user interface (UI) design because it plays a critical role in the product’s success. There are several drag-and-drop application designers available on the market. App design is becoming increasingly popular because it immediately impacts the user’s mind while providing a user-friendly experience.

Remember: even the best software for Android app development is not even half as effective as human professionals. If you turn to IntelliSoft, our engineers will prove it to you.

It can be native, web, or hybrid. Choosing the right approach to application development is very important. Ideally, in-house Android app development should meet the client’s time and budget constraints. 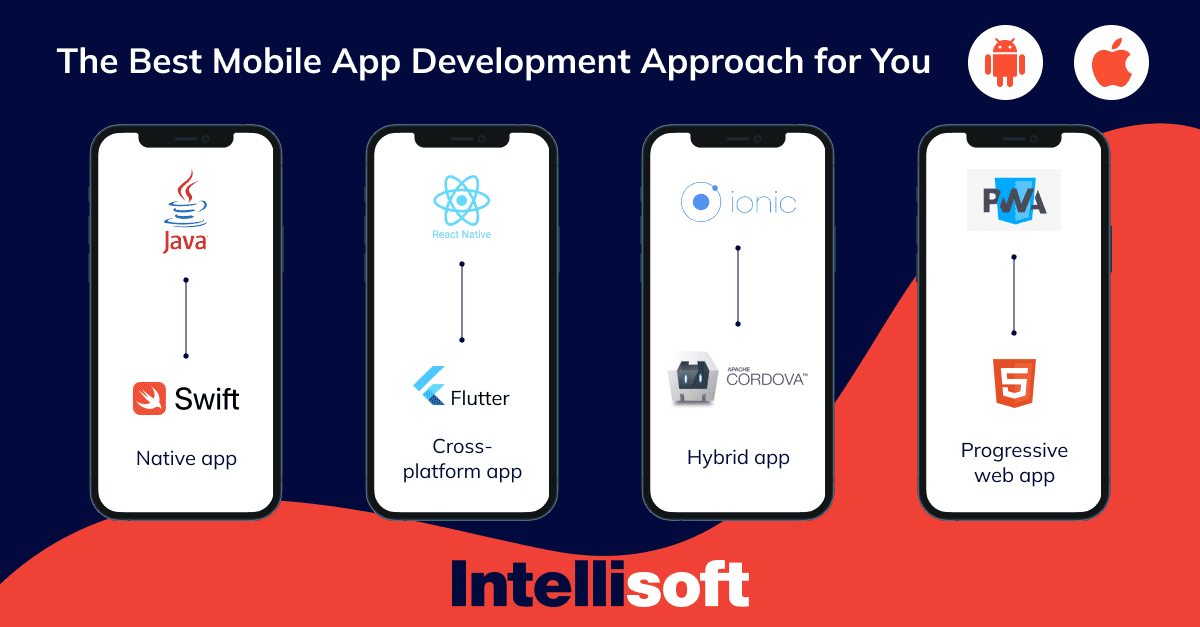 A number of app developers prefer to follow an agile methodology. Anyway, here is the difference between the three main approaches:

The next step after defining the approach is to develop a prototype. This is the process of turning your idea into an application with some basic features. The prototype makes it much easier to sell the idea to potential buyers, who can see tangible benefits instead of just visualizing or reading the product description.

It helps a lot in attracting investors, working with manufacturers, and finding licensees. You can also share the app prototype with testers for functional testing and get an idea of what you need to change to make it successful.

While working on the prototype, ensure you take steps to protect the app from unauthorized use and data access.

You should also include appropriate analytics that will give you a detailed picture of how many visitors are using the app.

Google Analytics. No ranking skips Google Analytics for mobile apps. The Internet giant analyzes its own Android platform, iOS, and others. This tool that comes along with accurate in-app analytics, offers a powerful free version plus custom tiers for businesses. It supports iOS, Android, and others.

Apple Analytics. Apple Analytics offers functionality with constant updates of analytical tools, an attractive design, and simple implementation. It only works for iOS. It is one of the most comprehensive and powerful tools for tracking all your in-app data. The fee is included in the developer membership fee ($99 or $299 annually). It supports only iOS and TvOS.

Appsee. Using Appsee, developers can get quality visual data about their mobile app. It is enough to click heatmaps to see the true behavior of the user. Records of user sessions are also available. Disadvantages include working only with iOS and

Android, although this can’t be called a big problem right now. As for the rates, they offer a 14-day free trial; pricing for standard plans not disclosed. 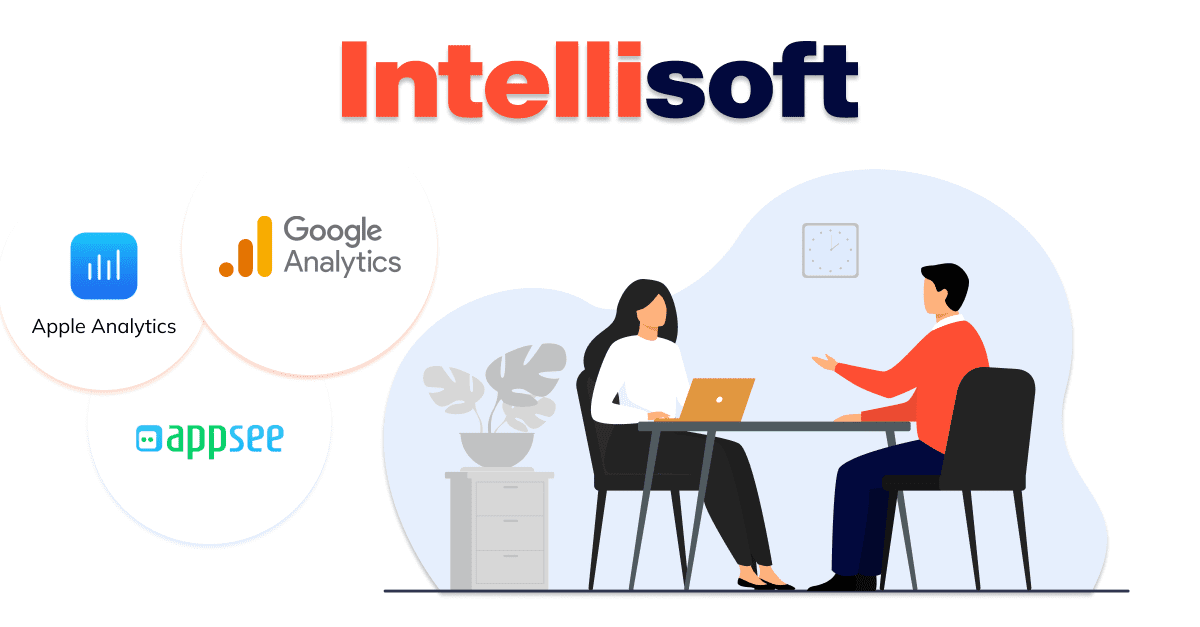 You should listen to testers and include appropriate feedback. Beta testing is the first opportunity to get feedback from targeted customers. This is essential because it increases your visibility in the app store. Not only does it reduce the risk of product failure but gives an initial push in the app store. Identifying beta testers is another important task for a successful mobile app.

While preparing for the launch of the beta:

Deploying an application requires a plan, schedule, and control to move releases to test and live environments. The primary goal of deployment management is to ensure that the integrity of the live environment is protected and that the correct components are released. 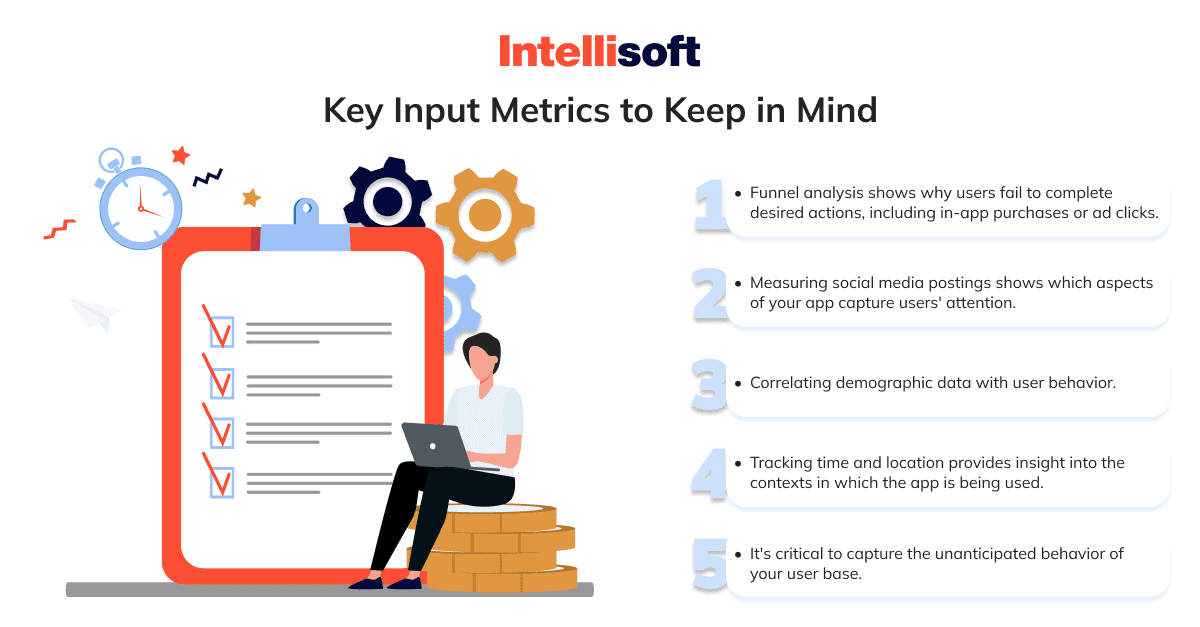 Well, once you develop Android apps, that’s not all! Do not forget about the improvements and new features.

Wait! Hold on! The job is not done yet. You should keep an eye on your app even after its launch.

Drive guests to your site and software. The users should become application installs and bring revenues.

Set priorities based on where and how often your visitors show up and promote your product on LinkedIn, TikTok, Facebook, Instagram, etc. You may create videos and presentations for YouTube and other video content platforms. Also, do not forget to concentrate on app store optimization (ASO). Make sure that your application meets all criteria.

Set and track your key performance indicators (KPIs). They can be, for instance, uptime and speed. How do users adapt to your product? Check whether users download and use the app actively. You may need to pay for analytics. However, it is way better than relying on your best guess. You will see which components are showing the best results. Maybe, it will help you come up with new features or introduce updates.

Do not be afraid to ask the customers to share their feedback and opinion on your product. Be ready to read or hear criticism. Focus on fixing bugs instead of arguing with your users. Show them that you really care – post all comments and respond to them.

Continue to Improve Your Mobile App

Stick to the steps used while developing your app. Make the software go through the full quality assurance (QA) process. Do not skip the regression testing. Even if the slightest change is made, check it using the corresponding tools. Remember that new versions of your application are needed all the time.

After each update, check whether the software is compatible with the recent app versions from Android and Apple. Moreover, the product should meet all standards like GDPR in Europe or CCPA in California. The application must be HIPAA compliant. That is why proper maintenance is required.

How Do You Make Money with an App? IntelliSoft Can Lend You a Helping Hand

Several ways to generate profits using an Android application exist. They include mobile commerce sales, referral or affiliate programs, and customer loyalty programs. Also, while some apps are fully free, others only offer a free trial. That is, you can charge customers a single-time fee to download your solution. You may offer things like coins, rewards, or bonus points that can be exchanged for some prizes or rewards. There could be several types of subscriptions (e.g., monthly or annual).

Also, those could be subscriptions based on the features and loyalties.

One more method to monetize a mobile application is by selling ad space. It is the same concept as running advertisements on your site. An app should not necessarily bring money. However, it can help you cut costs significantly. For instance, you can create an app for internal departments to support communication.

One day, you may realize that developing a mobile app for Android from scratch is a challenge you cannot handle with your in-house team for some reason. That is when IntelliSoft, with its outsourcing and team extension services, steps in.

IntelliSoft is a reliable tech partner that will take care of staffing the best experts in Android app development, crafting the project’s MVP, implementing further project improvements, and even providing tech support and maintenance. No matter how complex your Android product is or should be, IntelliSoft can provide the ultimate tech partner to take care of your project from the beginning to the end. From initial staffing to DevOps and support at all levels, just let us know what and how soon you need.

An HR manager at Intellisoft. Taya hunts new talents, assembles teams, monitors the mood of each employee, tracks the sick and vacation days, etc. She is also keen on learning more about the recent software development trends. 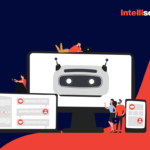 What Is Cross-Platform App And Why to Choose It?September 18, 2022
What Is Iterative Design Process?October 8, 2022 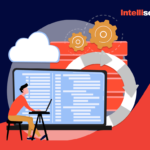