React.JS and React Native: Explore the Best Alternatives in 2023

The year 2011. The technical team discovered that the frequent changes were impeding their work as Facebook advertisements grew and included more intriguing features. The entire app has to be realigned as a result of cascading content revisions. The challenges rose proportionately as the team grew in size.

The model was sound, but a user interface (UI) revolution was required. At the same time, Jordan Walke, a programmer at Facebook, developed FaxJS, the original version of React.JS, using XHP (an HTML component library for PHP).

React.JS was implemented for Facebook’s timeline in 2011, which was a significant advancement. A year later, Mark Zuckerberg stated, “The biggest error our business made was relying too heavily on HTML rather than native.”

This marked the framework’s evolution as React Native. Two of the most potent technologies quickly emerged, shocking the developer community – React Native vs React.JS. React seems to be the perfect tool for building scalable web applications, especially when the app is a SPA (single-page application). It is relatively easy to learn and has a clear, concise syntax.

Is it difficult for you to choose between React.JS and React Native? Which one is better? Can you reuse React.JS code in React Native? IntelliSoft has all the answers – just keep on reading this post. 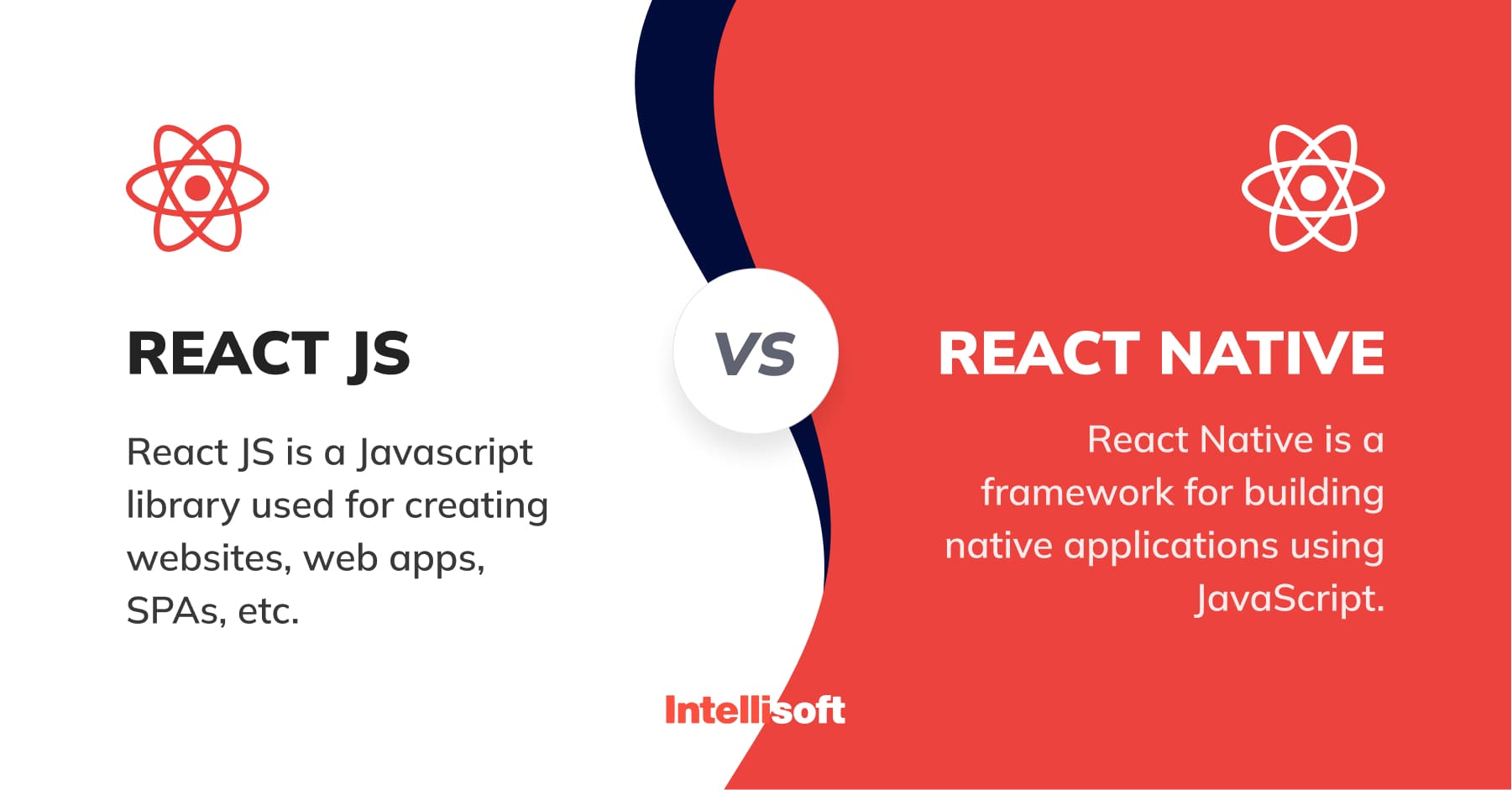 React is a popular JavaScript library densely used to develop user interfaces. It was released in March 2013. React was first intended for developing websites only. However, now, there’s an additional platform used for the development of applications.

React seems to be the ideal tool for building scalable web applications, especially when the app is a SPA (single page application). It is relatively easy to learn and has a clear, concise syntax.

A hallmark of the library is its focus on components. You can create individual components and afterward easily transfer them from project to project.

Its use of JSX is another essential feature of React. It represents a combination of JavaScript and XML and provides an easy, intuitive way to define a visual interface code.

Everything You Need to Know About the Popular JavaScript Library

Libraries offer a plethora of standard features that prevent developers from being worried about the functionalities of their apps. It is only vital to have JavaScript libraries in hand as per your need to save development and testing time. Read more about the factors that make so many developers work with JavaScript if React is not their option. 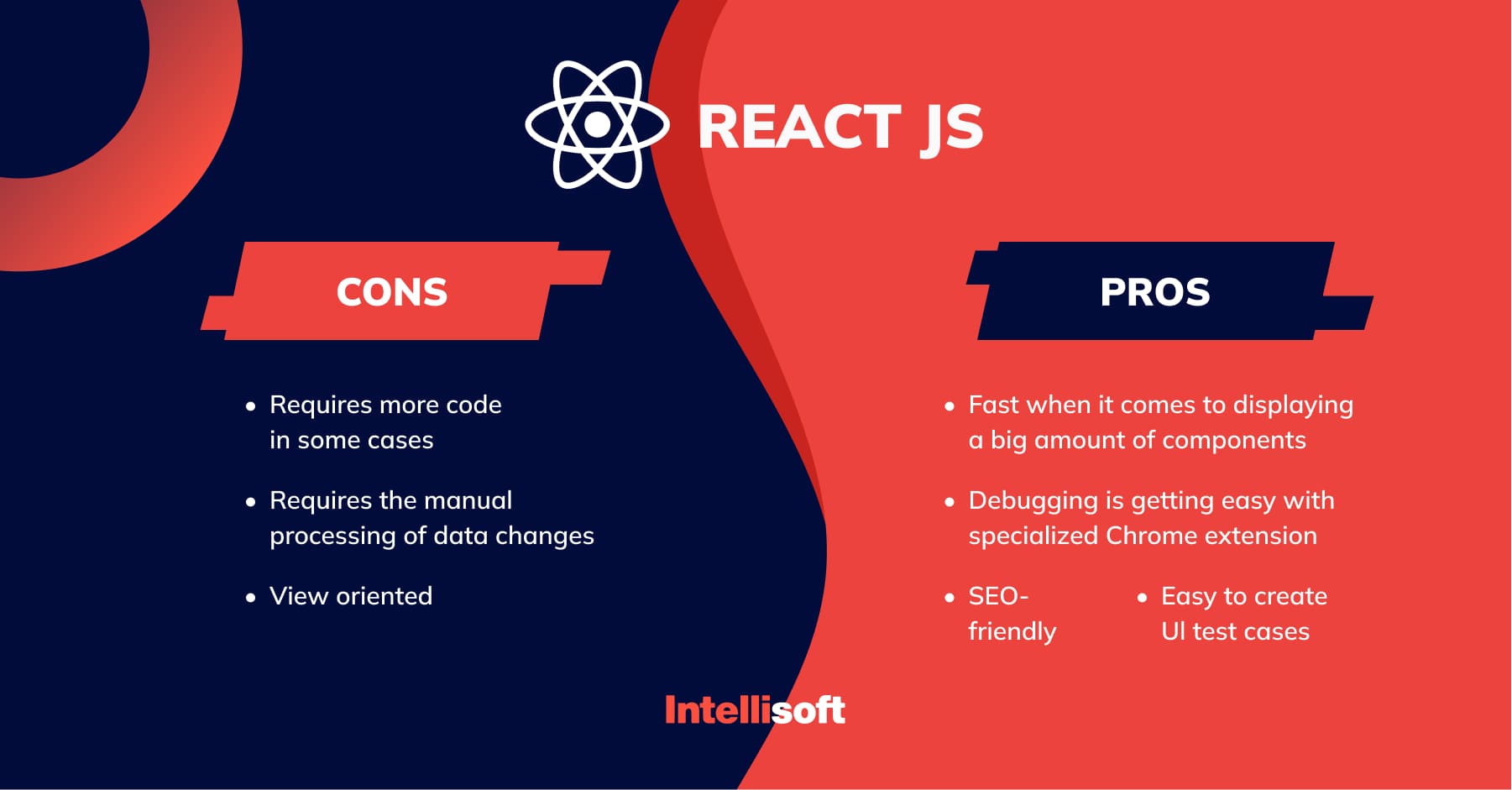 This library hasn’t got a built-in architectural pattern. It uses component-oriented architecture. Its UI’s are rendered by components that act as functions and respond to random data changes. Thus, the internal architecture is a constant interaction between the state of the components and the user’s actions.

When it comes to large applications, this library has many alternatives. It uses JavaScript exclusively. That means developers can use traditional methods of organization. The reusability of components notably increases the scalability of applications.

Community support is a vital part of any modern technology. Its members provide assistance to both novice and experienced developers.

This library is developed and maintained by Facebook. The company uses it in its projects and releases updates regularly. It means the library has constant community support. It is consistently creating and developing new tools.

There are numerous experienced React developers. According to the recent 2019 Front-End Tooling Survey, about 48% of developers are confident using React.

Another thing, the fresh HackerRank Developer Skills Report found that 33.2% of IT companies are looking to hire React developers. Only 19% are sufficiently qualified, though.

Main Benefits of the JavaScript Library

No wonder international giants are using this library. The most famous ones include Facebook, Instagram, Whatsapp, Netflix, Airbnb, and Microsoft.

Remember, React.JS is used to represent a page. You won’t get an event system, data layers, and a sole framework for several assignments.

Choose an Alternative Framework to React.JS 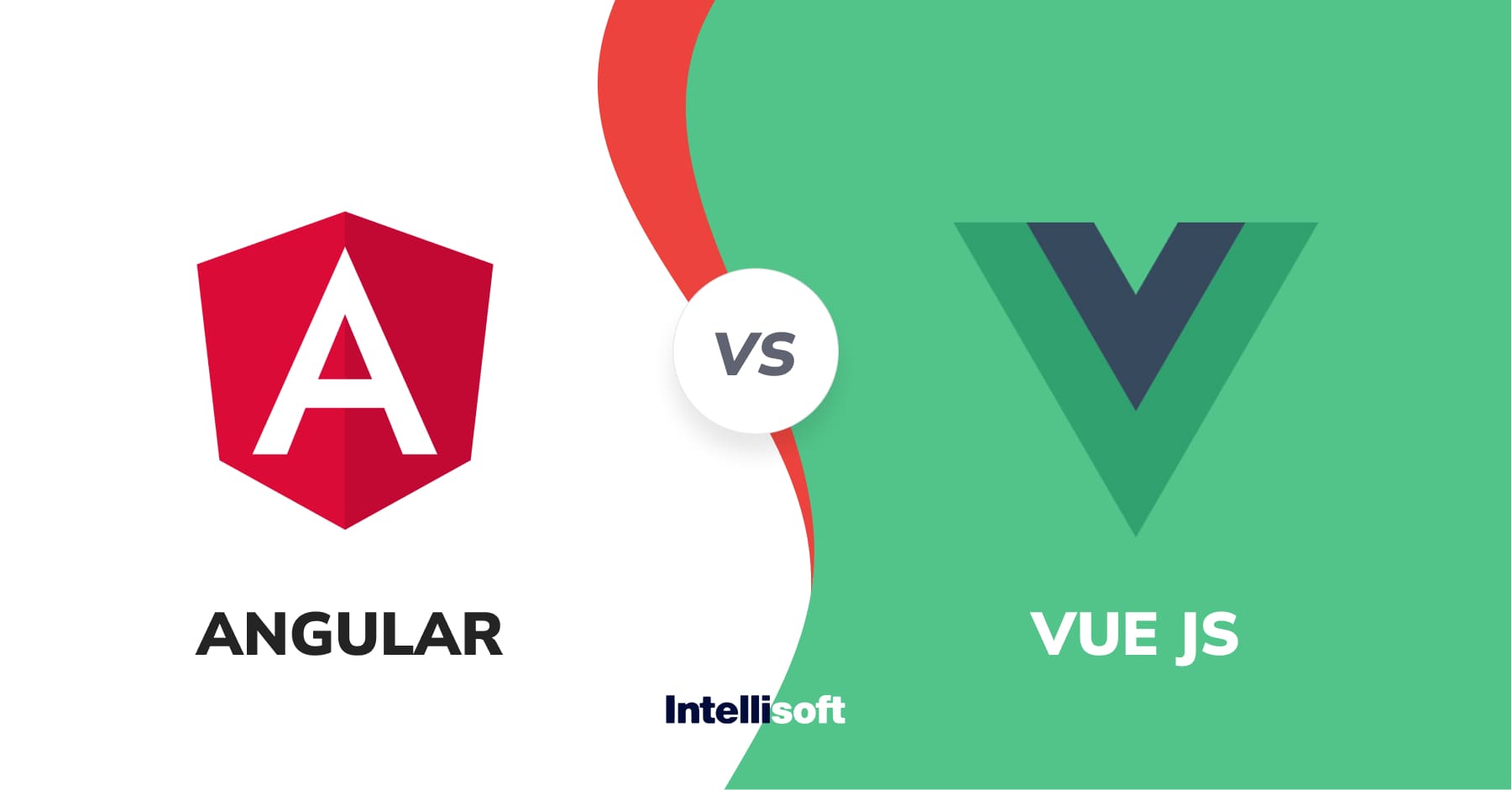 The lightweight, fast, and affordable front-end framework Angular has won the respect of a vast number of developers. It enables you to build interactive and dynamic web applications that require little effort and code. It makes no wonder that many young developers search for the keywords like “react js vs angular” to decide on a better alternative.

Angular is a framework for dynamic web applications that allows HTML to be used as a template language. You can eliminate most of the code you would have to write using data binding and dependency injection.

Vue is a framework for developing user interfaces in JavaScript. It’s designed to be progressively incorporated into an existing application. Vue solves various tasks of the presentation layer, simplifies the work with other libraries, and allows you to create complex single-page applications. To learn the framework, you need some experience in HTML, CSS, and, obviously, JavaScript (at least at a basic level).

Flutter is one of the best alternatives to React JS. It is a great open-source UI toolkit used to create web, mobile, and desktop platforms. Flutter uses a common code base. The code can be written once to run on multiple devices and platforms.

Flutter uses the Dart programming language. It facilitates the development of Android, iOS, and web platforms. The platform allows developers to make changes to Flutter applications and instantly see those changes in the UI. Its app versions use pre-compilation (AOT) on Android and iOS platforms.

Cordova is one of the best alternatives to React Native. This is an app development framework from Nitobi. The framework was renamed PhoneGap in 2011 by Adobe. The company then released it as an open source edition.

Cordova enables developers to build hybrid web applications. When building these apps, languages such as JavaScript, HTML5, and CSS3 can be used. This reduces the reliance on some platform-specific APIs like Android or iOS. Developers can wrap JS, HTML, and CSS depending on the device platform.

Applications built with Cordova are hybrid and offer similar functionality for both mobile and web platforms. Users can mix hybrid and native code snippets.

Apache Cordova also allows users to use wrappers like Intel XDK and Appery io. The framework has been used to build other well-known frameworks and tools. These include App Builder, Intel XDK, Quasar Framework, and VoltBuilder. It is, without doubt, a popular alternative you should consider.

It’s an open-source development environment used to develop Android, iOS, and Windows applications. It works as an abstraction layer to manage common and platform code. Xamarin uses several features such as memory allocation and collection of garbage. Xamarin is preferred for quality assurance, code sharing, and writing cross-platform C# applications.

Developers can use Xamarin to build apps with their own user interface and share code across multiple platforms. These include Linux, macOS, and Windows. Many specialists prefer Xamarin because of its common C # code base. It’s also preferred for its advanced feature set.

Ionic is a popular software development kit (SDK) used to develop hybrid mobile applications. Ionic was built initially with Angular JS and Apache Cordova. The latest version allows users to choose from a variety of popular interface networks. The framework allows developers to use Ionic components without depending on the UI framework.

Choosing Between React and Popular Alternatives

If you need to create complex enterprise applications, choose React.JS. It’s easy to learn, usually receives daily updates and enhancements, enjoys corporate support, and has a programmer community to answer any questions. A React.JS application is also easy to scale. A virtual DOM allows you to organize your HTML, XHTML, or XML documents.

React.JS is definitely the better alternative if you want to:

Consider using an alternative if you have to think twice because of the lack of official documentation or the big volume. Choose Angular or Vue.

If you need to build a Minimum Viable Product (MVP), React Native is the best solution. It is perfect for testing new business hypotheses and offers cool visualization.

React Native has the following advantages:

But remember, React Native is a young framework. Some components are missing, and the technology itself is updated quite frequently.

How We Can Help 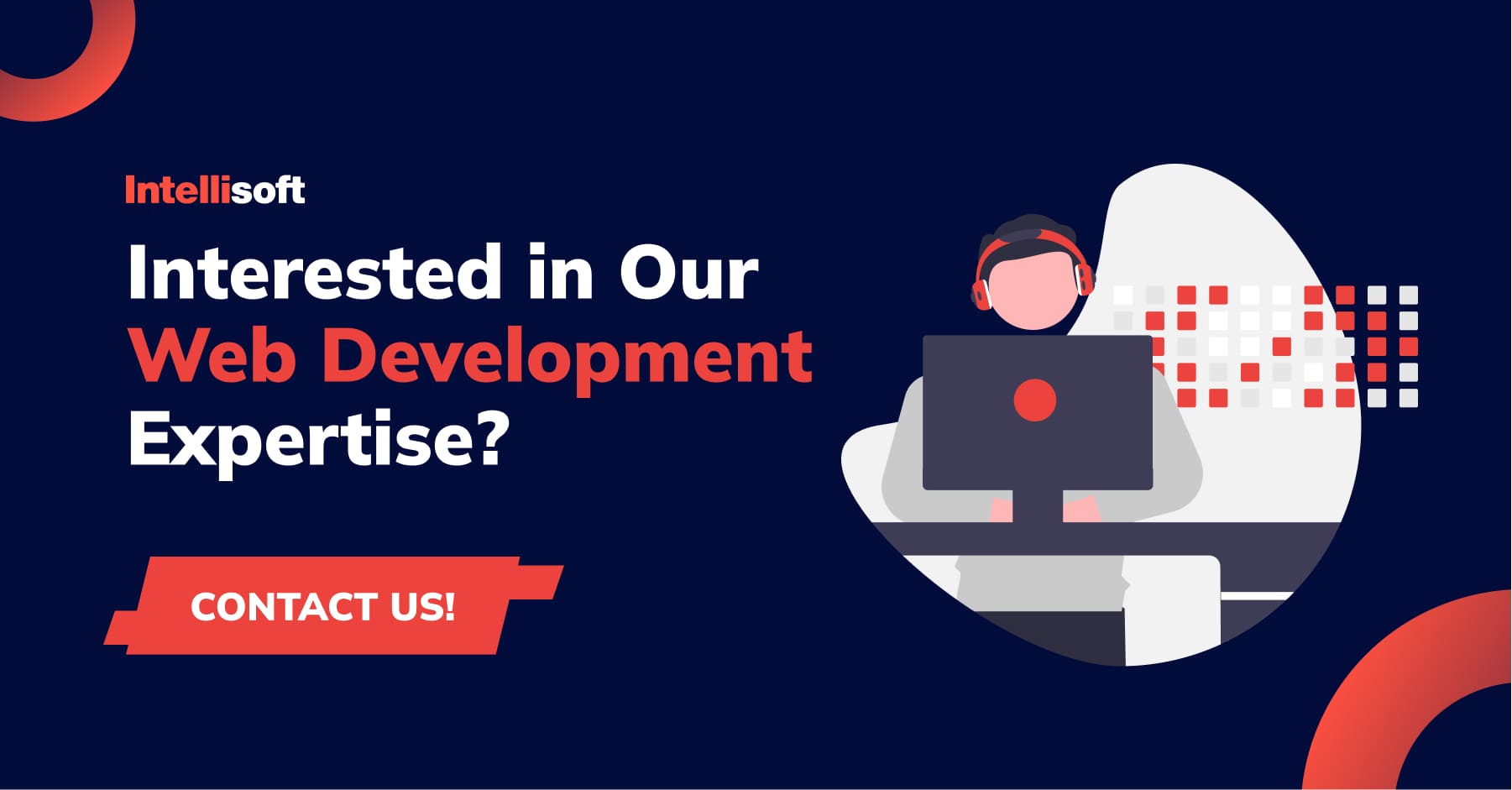 Are you lacking the talent to bring your ideas to life? The developers, QA engineers, and designers at IntelliSoft hold expertise in web, mobile, and IoT development, UX/UI design, testing, and many other IT services.

Reach out to us either for a project or your team extension needs! 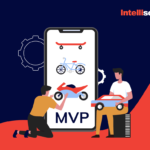 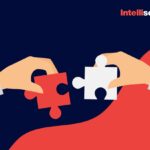