Angular vs React: Which Would Be a Better Solution in 2023?

Just pretend that you are scrolling through a Facebook newsfeed or another application on your device. To make your journey exciting and hassle-free, these industry giants use handy-dandy open-source JavaScript frameworks known as Angular and React.js.

These two are the most popular frameworks up-to-date. Let’s discuss the advantages of each framework. Although it is worth noting that the languages are very different, it is impossible to say unequivocally which option is better – React or Angular. They are different, used to solve different problems. 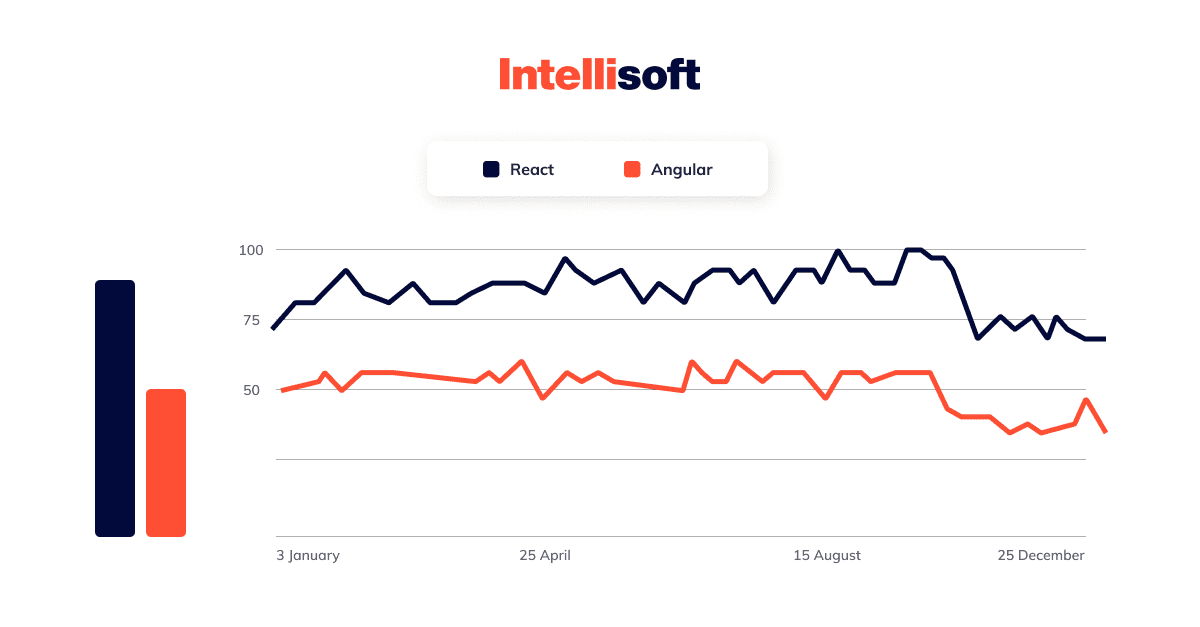 At the same time, as evidenced by the Google Trends application, React and Angular were the most popular in development during previous years. Moreover, analysts promise them a resounding success in 2020-22.

What Is the Main Difference between Angular and React?

The main difference between React and Angular is that the former uses a virtual Document Object Model (DOM). React is the winner when it comes to this factor.

DOM is not the only thing that makes Angular different from React. Consider other factors below.

Are you wondering why React is better than Angular (or vice versa)? First of all, it is worth noting that React was developed several years prior to Angular and has undergone many changes. As a result, it has become a convenient framework that many developers prefer to use. 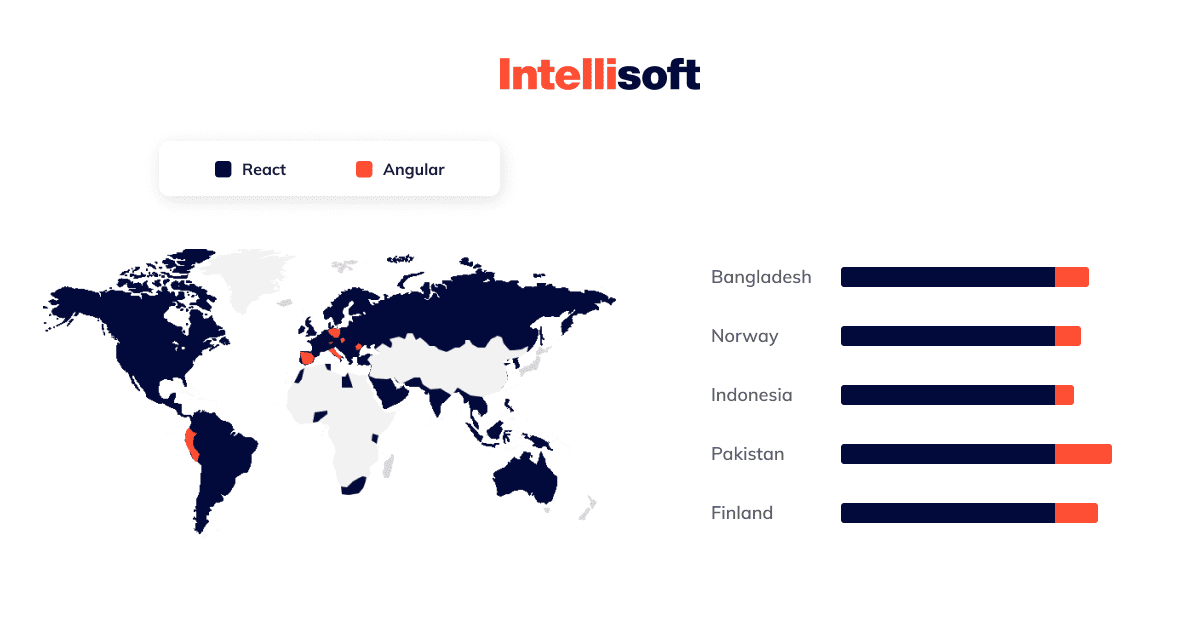 In addition, React has a vast number of codes in its database (about 100 thousand), as well as ready-made solutions (300 of them). The program is essentially an open-source library. The main difference between Angular and React is that the former has a wireframe structure. In its database, Angular has 1,800 ready-made solutions. However, this framework is rather large in size.

Both frameworks work with native and web applications.
React:

At the same time, each of the frameworks has its benefits and drawbacks. Let’s dwell on this in more detail.

Companies that use Angular

Companies that use React.js 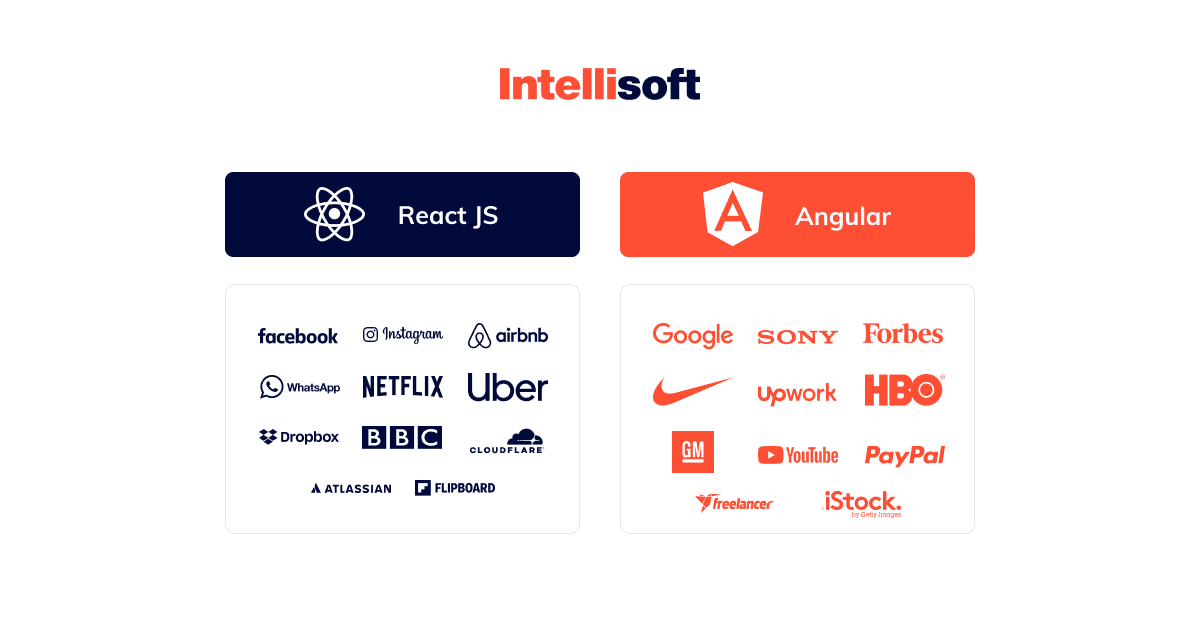 What Are the Advantages and Disadvantages of React?

React.js is a JavaScript library for user interface (UI) development introduced in May 2013. Facebook manages this framework. Also, it has a widespread, open-source community of developers.

As for the disadvantages, there are fewer of them:

Advantages and Disadvantages of Angular

It is another open-sourced JavaScript framework for web & mobile software development known since September 2016. Google’s Angular Team manages Angular. The native community is growing at a pretty impressive pace. Six versions of this framework were already released.

Angular has the following advantages:

At the same time, Angular has such drawbacks, as:

Angular under the Loop

Now, we have briefly listed the main pros and cons of Angular. It is time to dig deeper into this topic and explain when Angular might suit your project. Is it better than React? When it comes to mobile software development, Angular has an extra framework for it, just like React. Still, a great share of work is done by Ionic. No matter whether a developer plans to create web applications of small, middle, or large size, Angular will do.

No extra modules are usually needed to create software with its help. The angular package alone is enough to implement such functions as data binding and dependency injection.
Google provides the ongoing support of Angular, which adds credibility to this framework. Still, the updates are so frequent that the documentation falls behind.

Angular Web Components are based on the new Web Components standard, unlike the closed AngularJS modularization system. In practice, this means that AngularJS allows you to directly use any component written as a Web Component without resorting to layout code.

The biggest commercial advantage of TypeScript is its toolkit. This language provides modern autocomplete, navigation, and refactoring. Such tools become almost indispensable when working on large-scale projects.

The command line input (CLI) of the Angular framework makes it easy to create an application that works by default. This is in line with the best modern trends.

Angular doesn’t conduct a deep comparative analysis of objects. If you add an element to the data array, no path change will be detected. This also applies to the properties of the object, as long as they are not directly related to the View.

As for the pitfalls, here are some details that you should consider: 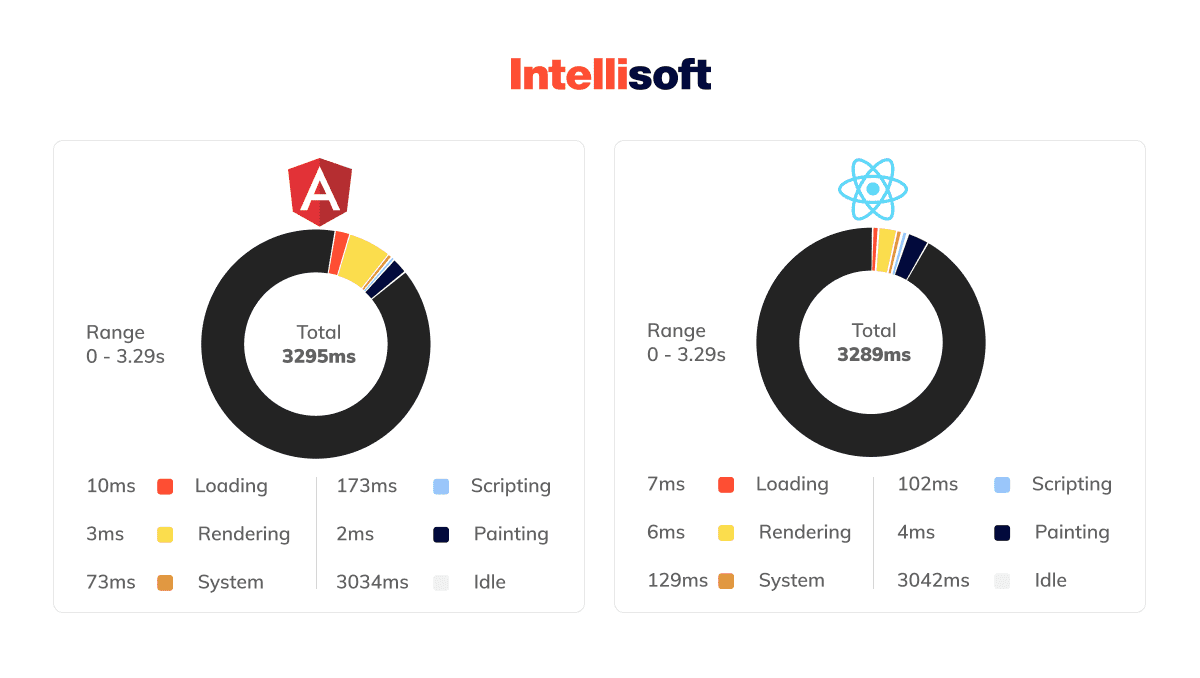 React.js under the Loop

Above, we have briefly listed the main pros and cons of React.js. It is time to dig deeper into this topic and explain when React might suit your project. Is it better than Angular? React cannot cope with the development process on its own. A developer should be ready that they may have to install additional modules and libraries. For example, this framework has to be incorporated with Cordova. Also, there’s an extra component known as React Native. With the help of this framework, it’s possible to come up with website apps of different sizes, from small one-page solutions to multiple-page applications.

React is regularly updated. Thus, the one who chooses React.js to design and build software must be a patient, continuous learner. Also, the developers risk missing some important updates even though the native community does its best to provide developers with the most recent docs and materials. Community support on relevant forums can come in handy when solving various issues.

React is quicker than Angular, and here is why. This library has a zipped file size of 34.8KB, allowing you to: 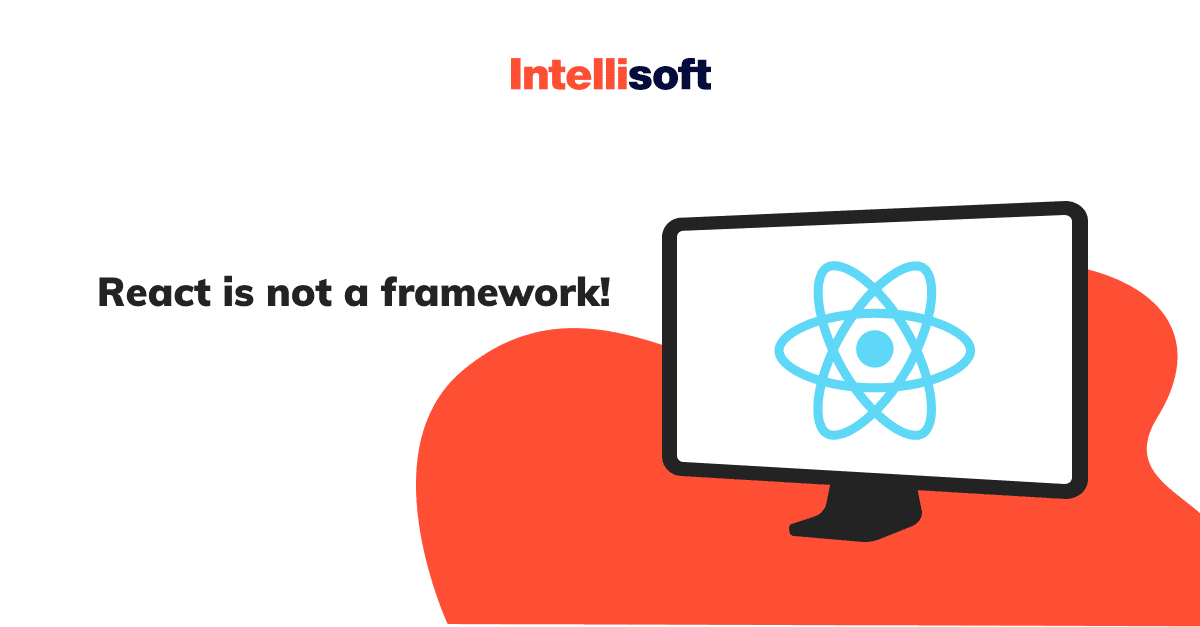 It is an open-source library. What does it mean? Basically, anyone can access and master React. This framework provides a declarative method for defining UI components. React DOM is an associated library that provides rendering and DOM diffing. Redux is a library that provides data storage, and React-Redux connects React and Redux.

React features are simpler than anyone may think. A developer does not need to create a class, as well as use extends and a constructor. The main problem is that many people misuse classes. With pure features, it’s harder to write bad code. In any case, expert developers from Intellisoft guarantee that all classes will be used properly, and the final product will be mistake-free, thanks to their expertise.

As for the pitfalls, here are some details that you should consider:

Build tools are required, and the only problem with using them in JavaScript is that there are no standard reusable solutions for your projects. This can significantly increase the time you spend translating ideas into code.

React is not a framework, so working with it can be frustrating. You know, when you have a burning deadline for projects and the first page of your React directory no longer works, you can get out of your temper.

Finally, the React community is not yet formed. Thus, it is not that easy to solve all of the possible issues fast.

Because of the upgrades, the codebases expand exponentially. Manual unit is a rather time-consuming process, so it’s better to automate them. Here are some ideas:

The first one is the default option for the native apps. This test runner suits diversified requirements to match the workflow. The idea is to examine the piece of software on multiple devices in different browsers and ensure smooth code functioning.

The second one, it is a behavior-driven development (BDD) framework for conducting software testing. It does not require a DOM. Jasmine is independent of any JavaScript framework.

The first option is suitable for React only. It allows for swift examination and interaction with components. Enzyme adds extra features to the testing process.

The second option is compatible with any JavaScript app like Angular. Facebook applies Jest to examine its services and React apps.

Both tools integrate well with each other.

Case #1: React is easier to apply for software with a complex user interface (UI). Its learning curve is way shorter than for many other languages.

Case #2: Angular is a full package as it possesses multiple built-in features. It’s not professional to compare these features with a JavaScript library such as React.

Angular has been on the market since 2010, unlike React, which came out in 2013, so it can be unequivocally stated that the Angular community is much larger.

There is no one-size-fits-all solution – choose what best suits your requirements in the long run.

What Our Clients Say 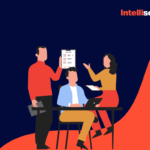 Signs That You Should Use Dedicated Team ModelDecember 30, 2021
How to Hire a Software Developer: Tips and TricksJanuary 5, 2022